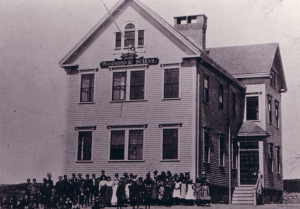 Disclaimer from the editor (Ruth): This was written during several breakfasts at local diners over coffee with much laughter.

Her Many Lives: In Four ActsG

Born November 10, 1927 in Cleveland, Ohio, the baby girl’s mother Lillian (Walsh) Gannon wanted her to be named Ruth. The Catholic priest said, 'No, the name needs to be a saint’s name.’ So the baby’s father Leo “Lee” Gannon, not a very devout Catholic, named her the only Catholic saint’s name he knew -- Mary. Didn’t matter; everyone knew her as Ruthie anyway. And as such, she went to grade school in Parma, OH. Ruthie and her brother Leo lived in the suburb Parma until the Depression hit. Then they moved to Cleveland where Lillian and Lee had a baby girl named Grace followed by a son named Paul. By then, at the age of 13, Ruth was attending Catholic boarding school in Syracuse, NY on a scholarship from her cousin – Sister Tarcisia. She left school for a year to assist her mother in caring for her siblings. When she returned, she passed exams for both years (including the one she had missed) to graduate with her friends as salutatorian.

Ruth worked at a department store after graduation, going by Ruthie for family and Mary Ruth for friends. When the phone would ring and the caller asked for Mary Ruth, her mother would call, “Ruthie, someone from the department store!’ She answered to everything, truly identifying where she was at that point in her life.

She went to college nights and worked at Ohio Bell days to pay for the schooling. She got engaged to Joe Nader. World War II was going on, and she and her friend Annette Keppler would challenge each other to the most written responses from the soldiers to their letters. Marines, Ruth recalled, were the best. Mary Ruth, as Annette called her, felt herself pretty savvy at 17. Joe was 27, a strict Methodist, no dance, makeup, shaved legs on the ladies, etc. Unfortunately, he told Ruth she thought too much and would be too busy with the children after marriage for books. “For whom the bell tolls” rang through Ruth’s mind at this point, knowing it was over though seeing no way out.

Mary Ruth found a way out of the stifling engagement; she entered the “Sisters of the Blessed Sacrament for Indians and Colored People” (SPS). Ruth had joined the convent to get out of the engagement but was selective in her search for a convent. She looked for one which catered to teaching African American children. Along came Katherine Drexel, a multi-millionaire who had founded SPS. At the novitiate (school for nuns) in Pennsylvania, Mary Ruth started student teaching and took another name, in honor of Christ the King – Sister Maria del Rey. She spent three years in the novitiate in Pennsylvania and then went out on “the missions”, teaching in New Orleans, LA; Gulfport, MS; and Nashville, TN.

Sister Maria del Rey settled in Gert Town (known as the bottom of the heap) and taught at St. Theresa’s on Galvez Street. She then moved on to a three-room school named St. Monica’s in Gulfport, Mississippi where she fell in love. Sister Maria del Rey fell in love with the people. She stood by helpless, however, as her friend Leontyne (“Tiny”) and unborn child died during labor and delivery from a lack of medical care. The hospital was divided by color. Just down the hall were the white doctors, but they couldn’t come help Tiny and Sister Maria del Rey was forbidden by Mother Superior to demand their assistance. “For whom the bell tolls again”, as Sister Maria del Rey knew she would be moving on at that point, though always carrying Tiny with her in spirit.

After leaving the convent, she joined her mother and siblings in Malden, MA and began working at Boston University. She met and married Arthur Hull Rigor da Eva, becoming Mrs. Arthur Hull Rigor da Eva, Jr. They lived in Boston, MA then moved to Barnstead, NH and had six children – Robert, Roy, Arthur, Donna, Michael, and Laura -- in seven and a half years. During this period, Ruth continued her education by attending the University of New Hampshire and obtaining a degree in English Literature with a minor in Education. The family moved to Newburyport, MA where “Mrs. R” taught special education classes for a brief period then second grade for several decades at the Woodbridge School in Newbury, MA.

After 37 years her husband left her, as her father had done so many years before with her mother. It was devastating at first, having taken the vow of marriage seriously, but she stayed close to her children and friends, remained active in the community, traveled, and found life was truly rewarding when freed of all encumbrances.

For $99 she and a friend flew round-trip on People’s Airline to Europe. Where? Anywhere. No plans. They landed in Brussels and boarded the bus that looked the busiest. Ruth gesticulated ‘sleep’ (hands beside head on one side) and ‘eat’ (imaginary fork to mouth) to locate the necessities. The United Nations was in town so the hotels were full. She and her friend looked down an alley and noticed the area was deteriorated but Ruth noticed a flashing red light. Dragging her friend along, they located the Maison du Pleasure (House of Pleasure) and inquired (despite the bored looking lady rocking her chair in the window.) After negotiating with the proprietor for a full night stay, not hour intervals, she and her friend overnighted. All night sirens were blaring, people were screaming, red lights were flashing . . . They took off early, still exhausted. They found the famous statue ‘little kid pee’ing’, bought a train pass for all of Europe, and decided they’d stop when they found something interesting. Bruges, she remembers was fairytale-like and they stayed on the canal. Little boats and swans floated by. They stayed at The Swan, a proper bed and breakfast. It was there that Ruth found the key to their room at the Maison in her suitcase – a key tethered to a huge rock. She threw out her robe and slippers to make room for the keepsake. Many years later, she gave it with a write-up of the Maison to one of her sons to put with his key collection.

Another much-loved trip was to Russia. Ruth had started dreaming of Russia as a child, having read all of Tolstoy before high school. She finally studied Russian with a private tutor and flew to, what was then, the “Soviet Union.” Ruth eventually travelled all of Europe over the years including mainland Europe, Ireland, and England. She claimed to know London better than Boston.

One of her best trips, however, was her trip to Israel. Israel was the one place from her earliest memories she had wanted to visit (Christmas story, Easter story . . .). An added thrill was the gun toting soldiers around Bethlehem. She had to have her passport for both Israeli and Palestinian soldiers. Palestinians were in charge of Bethlehem so their Jewish guide could not come in. They traveled to Masada – the mountain where the Israelites were being massacred by the Romans. When the Israelites could hold out no longer, they fell to their deaths when the Romans were about to butcher them. According to their religion, however, suicide was the worse sin so one Jewish man sacrificed his soul to push the others then jumped. A couple of women survived by hiding in a well and told the story. Ruth waited for her group just below the top with her cane in hand, thinking about the people who had died there. She heard music on the breeze. A little bird sat beside her. Finally, she came out of this moment and the sound was coming from the breeze blowing over her water bottle. The sound she tried to repeat was nothing like what it had been. In Tel Aviv with a 90-year old couple, Ruth shared the ‘mystery of the music’. The lady said it was the sound of the Israelites on Masada. To Ruth, it brought back memories of the Sufi wedding quote, ‘You are the breathing of the world’.

So, her journey started with God and ended with the Force (“May the Force be with you.”) with everything going so fast, so rapidly that the no-osphere in religion, trying to understand Pierre TDC, who predicted in the 30’s the world would reach the no-osphere through technology, truly predicted the world would and has united as one . . . atmosphere to biosphere to no-osphere. The mind that has evolved unites with the technology that has evolved and now “IN MY LIFETIME” the two are uniting. And, we have

Her passport in the end read Ruth Gannon, a name she personally selected and made legal. She wanted to start her life over from the beginning, determining who she was meant to be. She happily enjoyed her final years as Ruth Gannon in her own place in the heart of Newburyport, MA. At the age of 83 her travels were also personally selected – including our nation’s capitol in Washington, DC with family from Chile and then on to Barcelona, Spain with family from Maine.

She bids her family and friends a fond farewell from somewhere over the rainbow way up high. And that’s it in a nutshell, as nutty as they come. “And I won’t be around to be embarrassed by it.”

A special quote Ruth wanted to include, shared also in the celebration of the life of her grandson Joshua, “Death leaves a heartache no one can heal. Love leaves a memory no one can steal.” Ruth loves you all, each and every one, and still does.

Family and friends may call from 10:00 to 11:30 AM on Monday June 15, 2020 at the Twomey, LeBlanc, & Conte Funeral Home 193 Home 193 High St. Newburyport, MA 01950. THERE IS NO LONGER ANY PARKING AVAILABLE BEHIND THE FUNERAL HOME PER ORDER OF THE CITY OF NEWBURYPORT. Services and Burial will be private.

Memorial contributions may be made in Ruth’s name to SBS Development, Sisters of the Blessed Sacrament 1663 Bristol Pike Bensalem, PA 19020, or online at http://www.katharinedrexel.org/donate/memorials/

To send flowers to the family or plant a tree in memory of Ruth Gannon, please visit our floral store.