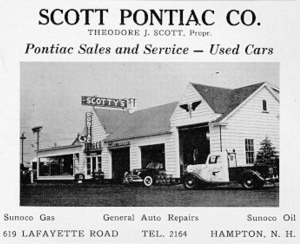 Theodore J. Scott, Jr., “Ted”, age 83, of Hampton, NH and most recently Westbrook ME died May 1, 2019 after a long illness. He was the son of the late Theodore J. Scott and Helen Colby Scott of Hampton NH. He graduated from Phillips Exeter Academy in 1953 where he was a member of the Cross Country Team. He went on to graduate from General Motors Technical Institute in 1957. After graduation, he joined his father at Scott Pontiac Company in Hampton NH where he was an award winning Service Manager for many years. While in New Hampshire, he was a member of the Portsmouth Country Club and enjoyed his time spent there. Ted was also an avid collector of coins and postcards.

A private burial will be held at a later date. The Twomey, LeBlanc, & Conte Funeral Home 193 High St. Newburyport, MA 01950 is assisting Mr. Scott’s family with his funeral arrangements.