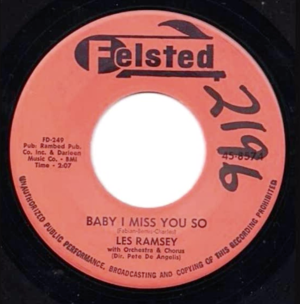 Leslie A. Ramsay, Jr; 93, passed away suddenly after a brief illness on Wednesday afternoon December 11, 2019 at Anna Jaques Hospital in Newburyport. He was born in Newark, NJ on March 22, 1926 to the late Gustava ( Allen) Ramsay and Leslie A. Ramsay, Sr. Raised in Portsmouth, NH Leslie attended Portsmouth High School before enlisting in the U.S. Navy where he served our country proudly during WWII, he then re-enlisted in the U.S. Army during the Korean War. Following his honorable discharge from Service he was employed at General Motors in Framingham while pursuing his music career with his brothers and sisters. Les formed the group Les Ramsay and the Spellbounds with his siblings and later became a solo artist who sang locally for many years. He was also employed as a Security Guard at Anna Jaques Hospital for over 25 years until his retirement at the age of 85.

In 1957 he met Elizabeth Dee while performing at a local club, the couple fell in love and were married shortly after. They settled in Newburyport and raised their family. Les was an artist in every sense of the word. In addition to being an accomplished singer, he was an extremely talented artist, drawing and painting in his spare time. Les was a very proud member of SAG the Screen Actors Guild for over 30 years.

Leslie is survived by his daughters, Lynda Jo Ramsay and her wife Rhonda Skomiro of Providence, RI, and Lori Ramsay of Haverhill; grandchildren, Jessica, Kyle, Kerri, Tyler, and Aleyah; 6 great grandchildren and one on the way very soon; siblings, Irene, Helen, Alan, and Pamela; as well as many nieces and nephews. In addition to his parents Leslie was predeceased by his wife, Elizabeth (Dee) Ramsay, son, Leslie A. Ramsay III, and 4 siblings.

Family and friends may call from 4:00 to 8:00 PM on Wednesday December 18, 2019 at the Twomey, LeBlanc, & Conte Funeral Home 193 High St. Newburyport, MA 01950. THERE IS NO LONGER ANY PARKING AVAILABLE BEHIND THE FUNERAL HOME PER ORDER OF THE CITY OF NEWBURYPORT. His Funeral Mass will be celebrated at 10:30 AM on Thursday December 19, 2019 at Immaculate Conception Church followed by burial at Belleville Cemetery  both in Newburyport.